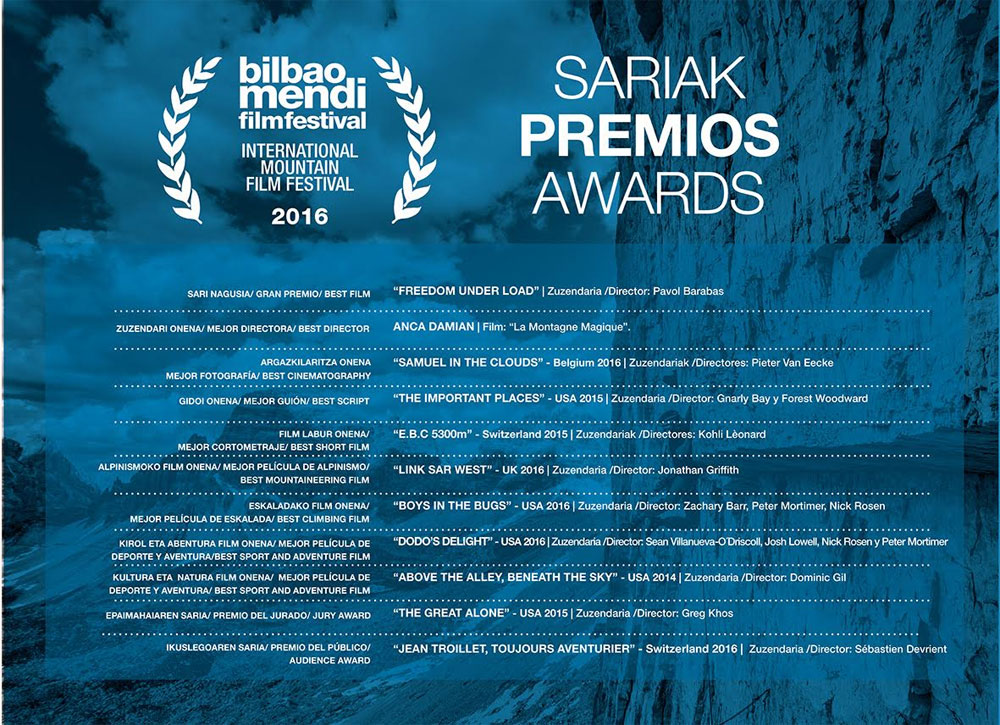 Bilbao, December 2016. Bilbao Mendi Film Festival 2016 is getting to the end in one of the most eagerly awaited moments. After the projection of the 43 films of the Official Selection throughout these 9 days, the Jury, formed by Pawel Wysoczanski, Jon Garaño, Hélios Gracia, Silvo Karo and Billy Choi, has decided to award with the “Eguzkilore” of the Best Film of the 9th edition of Bilbao Mendi Film Festival to Freedom Under Load.
The Slovakian film directed by Pavol Barabas, and produced by K2 Studio, has won the “Eguzkilore” and 6.000 euro because “it's a beautiful film and it offers hope, in a modest way. It's a film about the faith, and the devotion in the wonderful mountains of Tatra. The film offers calm and harmony, both very necessary nowadays”.

Those are the other winners:

Best Director (Eguzkilore and 3.000 euro): Anca Damian, for her film La Montagne Magique, a Romanian-Polis-French coproduction. The film has got the recognition owing to the excellent narration of a real history by using different animation techniques. It keeps the interest of the spectators in all the lenght. Anca Damian demostrates in each scene an amazing imagination and originality.
Best Cinematography (Eguzkilore and 2.000 euro): The Belgium film Samuel in the Clouds, directed by Peter Van Eecke and produced by Clin d´oeil films, has won this prize owing to the sense of observation and pacience. Not only shows the beauty of the landscape in Bolivia, but it also narrates the story of a lovely personality and the nature around him. Thanks to this cinematography we can understand what Samuel feels while watching how the world changes around him.
Best Script (Eguzkilore and 2000 euro): The American film The Important Places, directed by Gnarly Bay and Forest Woodward, wins the prize for weaving youth an aging, and enlightenment of the flow of nature and life in a very elegant way.
Jury Prize (Eguzkilore and 1.000 euro): The Great Alone, the American Film, directed by Greg Khos, receives this special mention because of drawing, with a huge visual acuity and excellent edition, a man's challenge in the deserted and extreme nature in Alaska.
Best Short Film (Eguzkilore and 1.000 euro): E.B.C. 5.300m, the Swiss Film of the director Léonard Kohli wins the prize for representing the raw reality of the Everest base camp, with a pure cinematographic language, just only images and sound. It makes the spectator think of the current situation in the mountain.
Best Mountaineering Film (Eguzkilore): Link Sar West, Jonathan Griffith's film receives this prize for the insistence of the team so as to go ahead both climbing and shooting the movie. Even if the shooting weight goes to the two climbers, the 30 minutes long film fulfills the requirements of the best mountaineering cinema.

Best Climbing Film (Eguzkilore): the American film Boys in the Bugs directed by Zachary Barr, Peter Mortimer and Nick Rosen, produced by Sender Films has won the prize. Excellent camera work accompanies them in the world of splitter seams and smooth slabs.

Best Sport and Adventure Film (Eguzkilore): Sender films also wins this award for Dodo's Delight, directed, in this case, by Sean Villanueva, O´Driscoll, Josh Lowell, Nick Rosen and Peter Mortimer, “for climbing in a serious way and with a lot of talent accompanied by a sense of humour and a boundless happiness”.

Best Mountain Culture and Nature Film (Eguzkilore): Above the Alley, Beneath the Sky directed by Dominic Gil and produced by the American Encompass Films, it's a life lesson and a message of hope for a better tomorrow, linked to a sport like climbing.

The Jury has been formed by the Basque Director Jon Garaño; the Polish Director Pawel Wisoczanski; the Director of Coupe Icare, the Free Flight Festival of France, Hélios Gracia; the Director of the Mountaineering Festival in Gorniskega, Silvo Karo, and the programmer of UMFF in South Corea, Billy Choi.