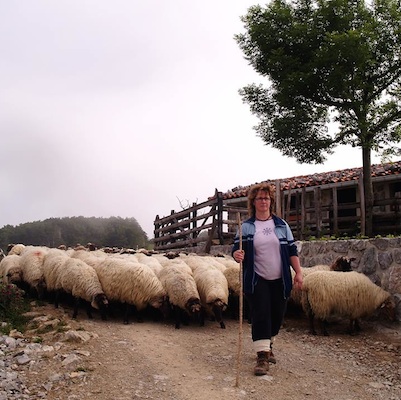 Protagonist of the short film ‘Dominica’

Born in Zarautz, she finished the administrative studies and began working in 'Refractory Arrillaga'. In 1980 he married and went to live in a village of Itziar, leaving her office work. After being widowed in 1985, he rented a farmhouse in Aizarnazabal, and with his young daughter, was responsible for a flock of 200 sheep. From 1986 to 1990, she was president of the Association of Shepherds of Gipuzkoa, and member on the boards of numerous organizations: Artzai Gazta Elkartea, the union EHNE, Urkome Mendi Nekazaritza Elkartea ... In 1992 she married again, and with her second husband, Mikel Etxezarreta, began to work on mountain shepherding, in Urbia. Now they spend the winter, from November to May in Aizpea cheese factory, in Olaberri, and summer, from May to November, in Urbia.