The Basque breeze of high mountain cinema at sea level 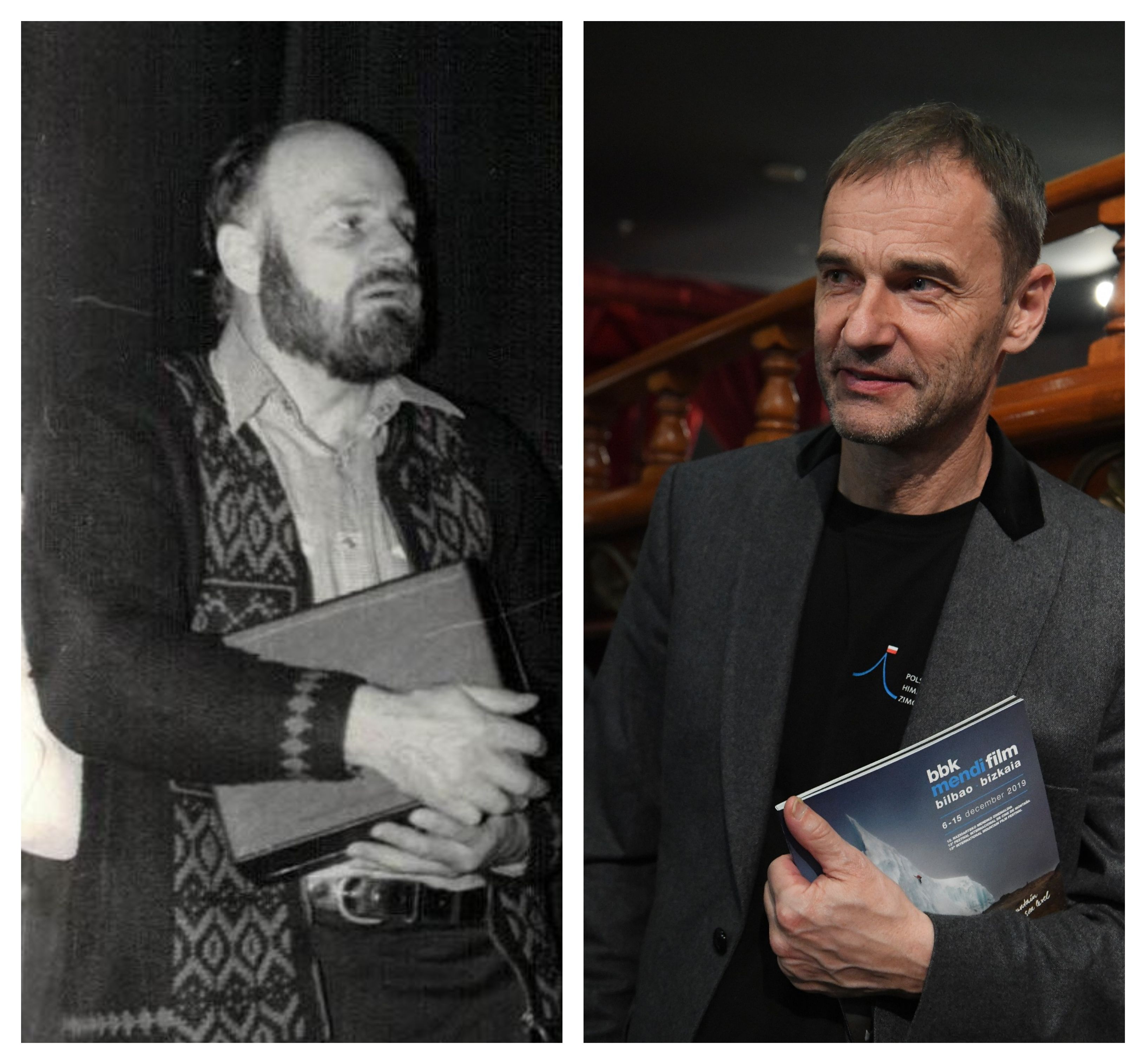 Kurt Diemberger now has someone to delegate to: Dariusz Zaluski. Both are nicknamed "filmmakers of the eight-thousanders", and only three years after Diemberger was awarded the Grand Prize of the IAMF-International Alliance for Mountain Film, Zaluski wins it this year.

Dariusz Zaluski is a Polish filmmaker of reputed experience and a mountaineer with many expeditions under his belt. He presented ‘Ostatnia Gora (The Last Mountain)' in Bilbao, an excellent film that shows the experiences, internal conflicts and exploits of the Polish expedition to the winter K2 in 2018. Krzysztof Wielicki was the leader of that expedition, which included leading mountaineers such as Denis Urubko and Adam Bielecki. Zaluski was just another expedition member among them, mainly in charge of filming. In addition to those already mentioned, he has worked with such prestigious mountaineers as Andrzej Zawada, Simone Moro, Gerlinde Kaltenbrunner, Piotr Pustelnik and Piotr Morawski.

Zaluski, 62, is fully involved in expeditions to the Himalayas. Diemberger, at 89, is at another stage, that of contributing to mountaineering and mountain cinema from his experience. It is true that having the first historic ascents of Broad Peak (1957) and Dhaulagiri (1960) to his credit gives him a great deal of cachet, but he also has other reasons to be proud of on his CV: he has been a prolific filmmaker and mountain writer, which is why in the world of mountaineering he has been associated with the nickname of "filmmaker of the eight-thousanders". In 2018, the Austrian received the IAMF Grand Prize in Bilbao, in an intimate ceremony held in the Sala BBK as part of the 11th edition of Mendi Film. 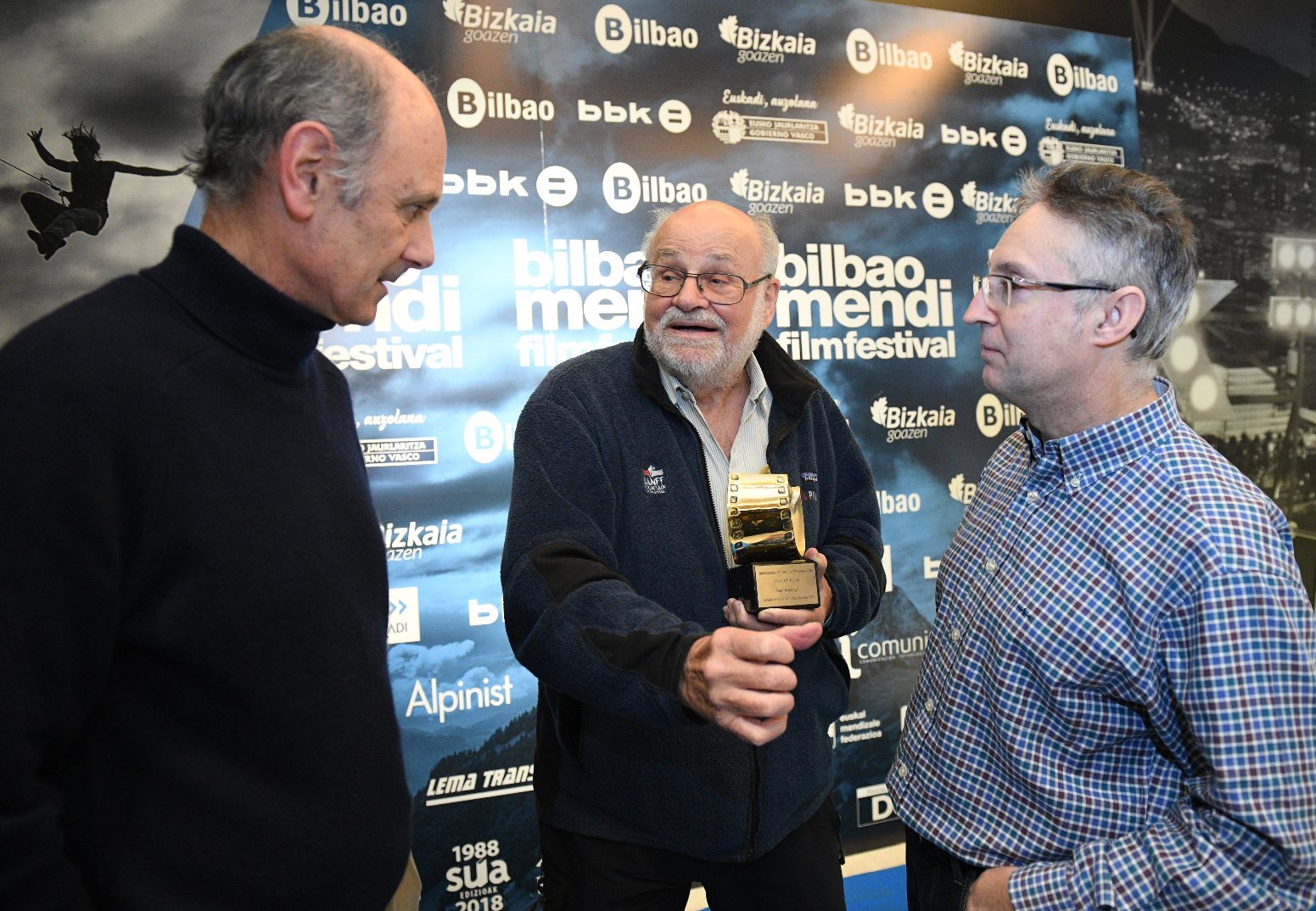 Kurt Diemberger together with Jabier Baraiazarra and Eduardo Martínez, Director and President of Mendi (2018)

Kurt Diemberger has always had a special connection with the Basque Country. How many times must he have worn the kaiku that Pedrotxo Otegi and his wife Carmen once gave him, the one with the coats of arms of Errenteria and San Sebastián sewn on it. Pedrotxo Otegi was President of the Basque-Navarre Mountaineering Federation from 1957 to 1967, until the uproar generated around the issue of the ikurriña in the Andes caused the Francoist government of the time to ban the Basque federation; Otegi had taken over from Ángel Sopeña and during his term of office he renewed the vision of mountaineering in the Basque Country: He invited renowned international mountaineers to give lectures and screenings, showing the new generations of local mountaineers the revolutionary trends that were taking place on an international level. Diemberger was one of those stars, and since then he returned to the Basque Country on numerous occasions in the 1970s and 1980s.

The San Sebastian mountain film contest was one of his favourite destinations. There he presented some of his films such as 'Diamir Les Envoutes de Nanga Parbat', 'K2, La Montaña de los Italianos', 'Everest East Face', 'K2, lo Spigolo Nord'... even becoming a member of the jury in the 1982 edition. He became a loyal friend of the festival until the San Sebastian flame was snuffed in 1985.

For seven magical years, the competition was attended by worldwide leading mountaineers. They became a source of inspiration and information for Basque mountaineers, for the thousands of spectators who attended the sessions. The public was able to experience, for example, the revolution in sport climbing compared to traditional climbing by watching Manuel Martínez 'El Musgaño' free climbing in La Cabrera (Madrid), in the film 'Nueva Dimensión' by Sebastián Álvaro (1981), or admiring Patrick Edlinger's climbing in 'La Vie au Bout des Doigts' (1983), by Jean Paul Janssen.

Kurt Diemberger, Sebastián Álvaro, Jean Afanassieff, Renato Casarotto, Julie Tullis, Bernard Germain, François Valla and Gilles Chappaz were some of The People from the mountain world who were to be seen in the projection rooms of the Miramar cinema, or in the Caja de Ahorros Provincial de Gipuzkoa and the Caja de Ahorros Municipal de San Sebastián cinemas.

The culture of mountain cinema began to take hold among fans, who began to get to know the names and careers of the most successful filmmakers, such as Leo Dickinson, Jean Marc Boivin, Denis Ducroz, Gerhard Baur, Patrick Vallençant... the influencers of those times, important references, who attracted a huge following. The San Sebastian showcase also served to highlight the talent of national and local authors, such as Javier Garreta, Suso Rodríguez, Jordi Pons, or Martín García Garmendia. It was the time of 35 mm and 16 mm films, and also the time when Super 8 began to be seen as an agile and useful resource in mountain filming. 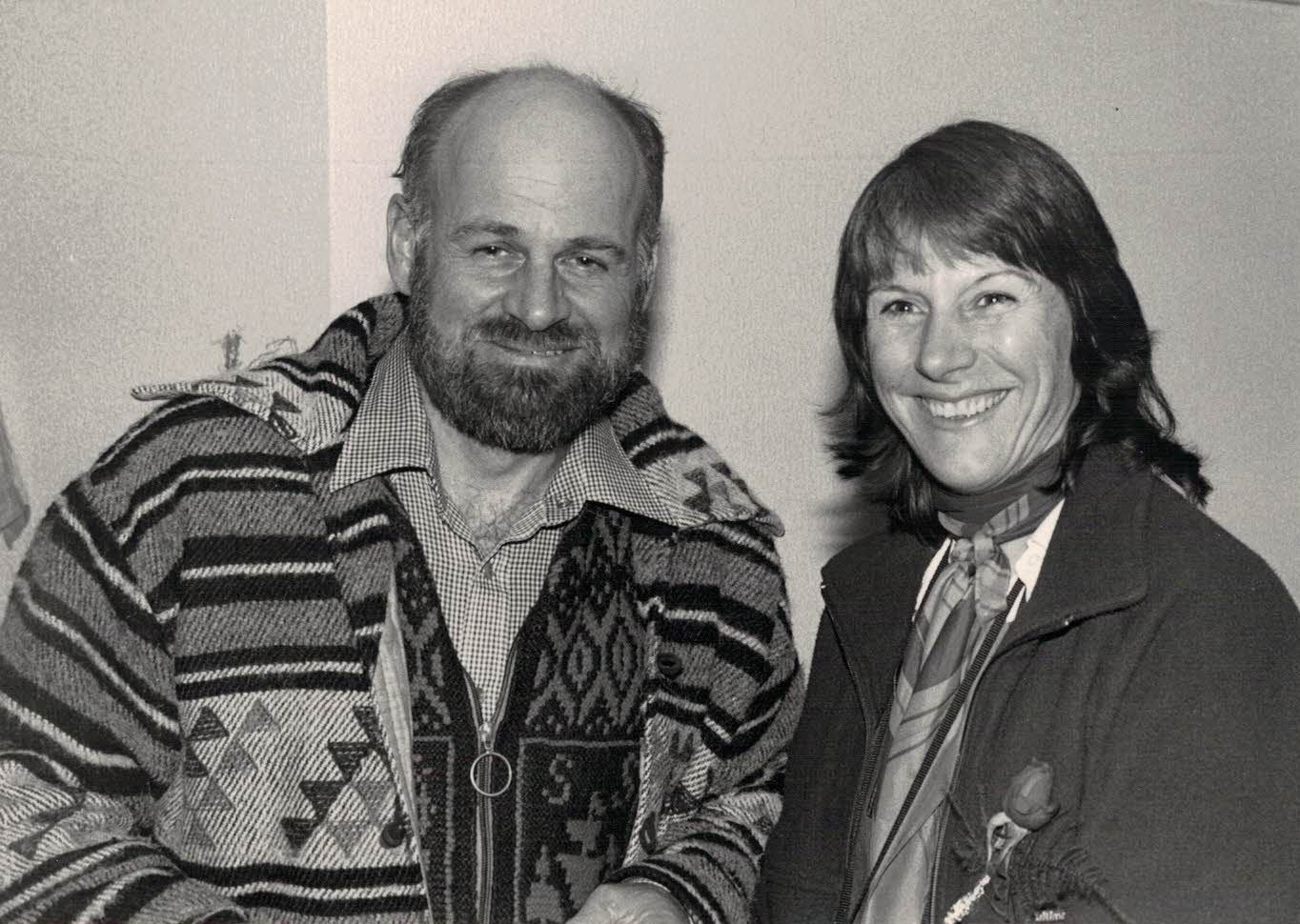 The IAMF awards and the Basque Country

The San Sebastian International Mountain Film Contest and the IAMF Grand Prize are closely linked, despite the fact that 17 years have passed since the disappearance of the former and the creation of the latter. Several authors who presented films in San Sebastian in the 1980s have subsequently received recognition from the IAMF in the new millennium: Gerhard Baur premiered the IAMF Grand Prize in 2002; the German filmmaker presented four films in San Sebastian and with 'Der Weg Ist Das Ziel - La Tragedia del Eiger de 1936' won the Aritza de Oro - the golden oak, San Sebastian's main award - in 1983. British director Leo Dickinson won the Aritza de Oro twice, with the films 'Dudh Kosi - Relentless River of Everest' (79) and 'Eiger' (84), and was honoured with the IAMF Grand Prize in 2003. Sebastián Álvaro, the Madrid-born director who over the years contributed greatly to mountain cinema through the television programme "Al Filo de lo Imposible", received the IAMF's main award in 2008. Finally, the Frenchman Gilles Chappaz, editor of Montagnes Magazine and member of the jury of the San Sebastian competition in 1983, received the IAMF award in 2017.

The San Sebastian International Mountain Film Contest, which was held between 1979 and 1985, left a deep mark on the Basque Country, and also on an international level. At that time, the benchmark was the Trento Festival in Italy, founded in 1952, and also the Les Diablerets festival in Switzerland, which premiered in 1969. The American festivals of Banff and Telluride were still in their infancy (1976 and 1979 respectively). The reference point for starting to organise the San Sebastian festival was Trento. As if it were a mountain expedition, Gregorio Ariz carried out the first inspections, presenting himself in Italy, and drew up some reports for the Basque Mountain Federation-Euskal Herriko Mendizalena, presided over by Antxon Bandres. On 28th October 1978, the project to organise the film competition was publicly presented at the assembly of mountain club presidents. At that time, it was proposed to David Hernández to take the project forward, and he accepted the challenge, inviting Iñaki Egaña to form a climbing team. At the end of 1978 they were working on the project, and they also went to Trento to ask for information and leads to contact the filmmakers of the time. David Hernández was the director of the event, and Egaña was the technical director. This was the case for the first six editions, and they withdrew to consultancy work in what was the last edition, the seventh, in 1985.

For seven years San Sebastian, and the Basque Country, became the hub of mountain culture, to the point of being internationally on a par with Trento and Diablerets, or even, according to some, ahead of them. Emphasis was placed on the massive attendance and the warmth of an audience full of devotion. More and more filmmakers wanted to come with their new films. The Basque Country was a major reference on the international map of the mountain film industry.

Mountain films continued to be shown in other venues, even though they were no longer part of an event: a Mountain Film Series was organised in Gipuzkoa (from 1987), in Vitoria the Mountain and Ski Film Week (created in 1980), in Pamplona the Anaitasuna Mountain Days (1980), in Bilbao the BBK Mountain Week (1994), and from town to town, from club to club, various initiatives on mountain culture.

Mendi Film since 2008 first in Vitoria and then in Bilbao

The Mendi Film Festival began in 2008 in Vitoria, presenting the latest international mountain films, the most prestigious filmmakers and the most cutting-edge athletes in a competition format. After four editions, in 2012, the festival moved to Bilbao, where it continues to be held annually in December.

The Mendi Film festival  is already at the forefront of the IAMF, there is a strong relationship between the two. Mendi, was accepted as a member of the alliance in 2011 and its director Jabier Baraiazarra, is also president of the IAMF since 2018. Although distant and unconnected in time, the San Sebastian competition and Mendi Film have many details in common. Many of the IAMF award-winning filmmakers have also participated in Mendi Film: Keith Partridge, the Lapied family (Anne and Erik and their daughter Véronique), Alastair Lee, Pavol Barabas, Michael Brown, and the production companies Sender Films and Sherpas Cinema. 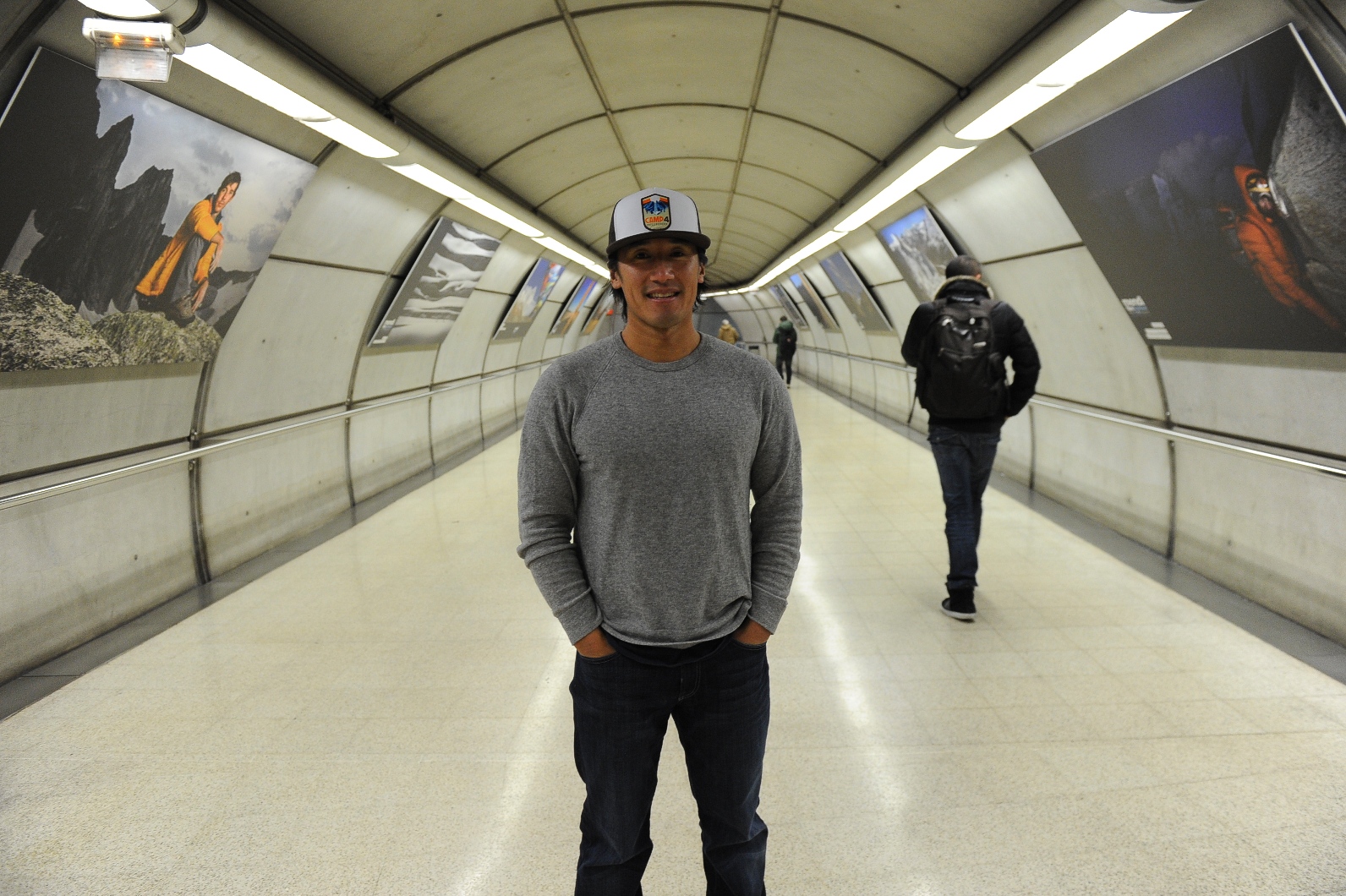 Jimmy Chin and his exhibition in Metro Bilbao (2013)

IAMF and Mendi Film are refuges where mountain cinema is promoted and encouraged, both globally and locally. Dariusz Zaluski and Kurt Diemberger are two of the freshest testimonials, and Sebastián Álvaro himself will receive this year's The Walk On Project Award at the BBK Mendi Film Bilbao-Bizkaia festival, to be held from 3 to 12 December. He will join a glittering list that includes Chris Bonington, Peter Habeler, Josep Manuel Anglada and Eli Verges, Nives Meroi and Romano Benet, and Juanjo San Sebastián.

“A High Mountain Film Festival at Sea Level" remains, as before, the meeting point for the best representatives of mountain cinema in the Basque Country. 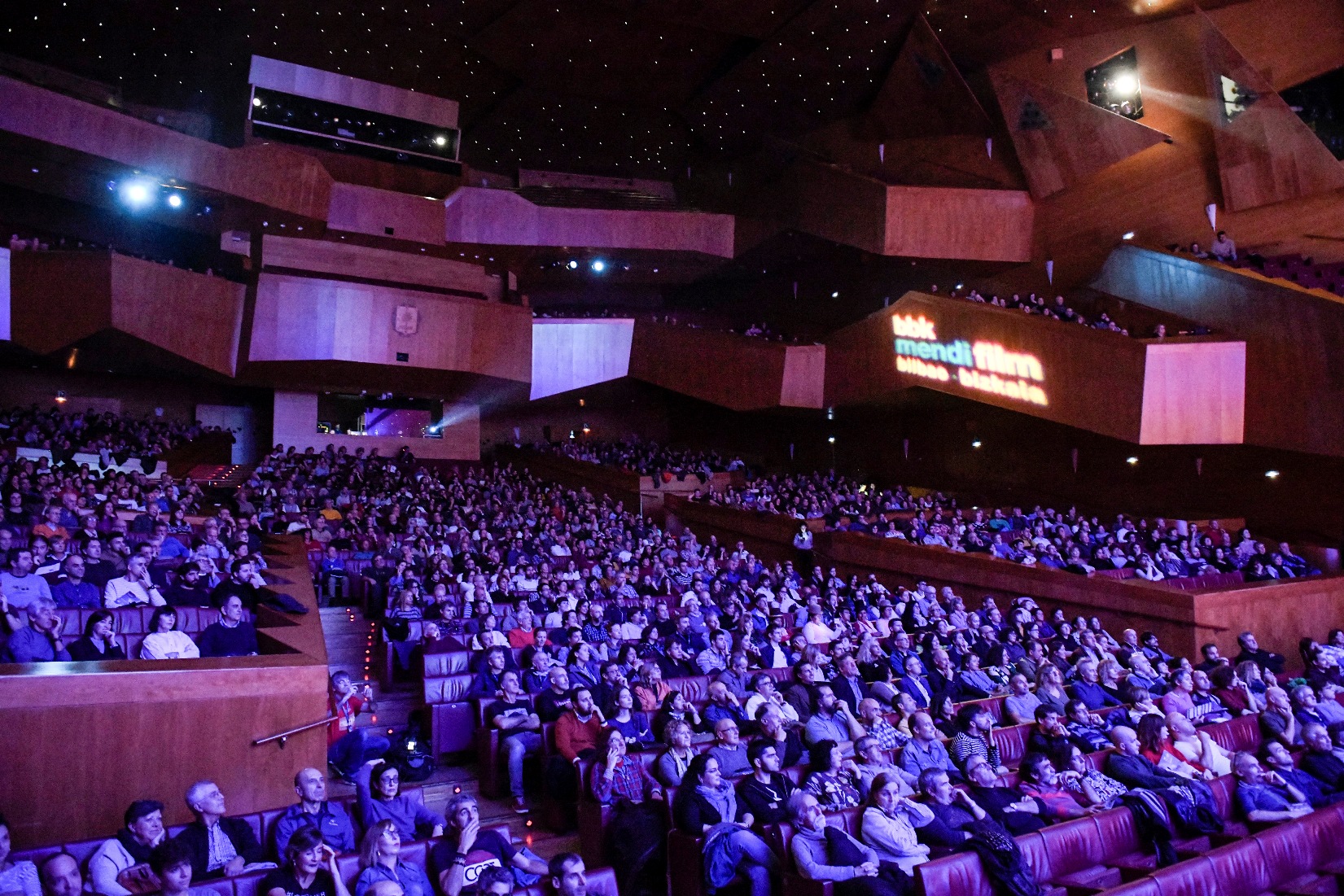