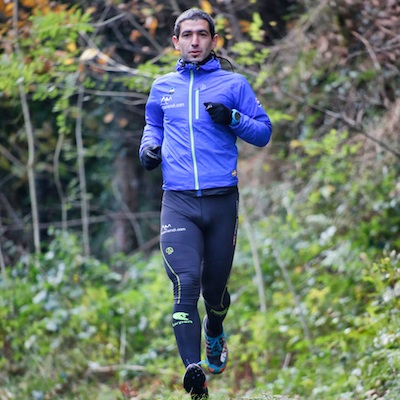 Director of the 'Clinic about training and techniques for mountain races'

This runner from Urnieta (Gipuzkoa, Basque Country), born in 1979, has a degree in Physical Education and is specialist in mountain races. He usually takes part in this type of events and he is a physical coach. In addition, he is a member of the Basque Selection of Mountain Races and the Ternua team.

One of the results that boosted his career was the victory in the "Chaberton Marathon" (World Cup Trail) in 2009. Another of his great achievements took place in Zegama´s competition (World Cup) in 2012, where he finished in the 5th place. He was also victorious in the "Marathon Montcalm" (Sky Race World Cup) in 2012. His list of achievements includes victories such as Arratzu Urdaibai, Mello Saria, Donostia-Hondarribia, Comprehensive Valdecebollas, Urnietako Mendi Lasterketa, Montan Trail Aspe, Hellmouth, Senpere Trail... Although we must not forget that he is the Basque runner with the record in Zegama-Aizkorri: 3h 59min 11s. One of his most important recent achievements has been the 3rd place in the overall placing of the World Cup.

At the same time, Jokin has also been coaching a wide range of runners for lots of years. From young talents of the Basque team to elite runners, who are currently in the world Top10 of their specialties, as Manuel Merillas, Aritz Egea or Jordi Gamito.

The course about  mountain races will take place in the Hostel of Bilbao on 19 and 20 December.