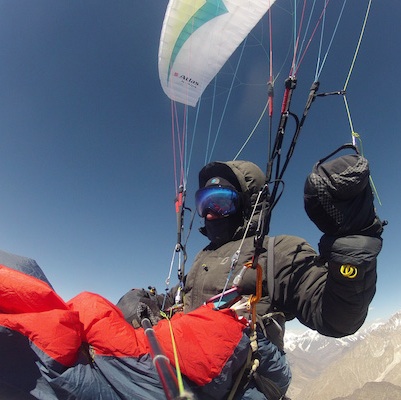 Jean -Yves Fredriksen is a french climber, paraglider and high mountain guide. He is known as Blutch and he has won his recognition because of his  films, climbs and expeditions.

Jean Yves was born in 1975 and grew up in the Vosges in eastern France. Now he lives in the Abondance Valley, where he spends summers teaching climbing and leading mountaineering expeditions. In the winters he teaches skiing.

He has climbed, among others, de route “des papas” in the Dru Mountain, the Cervino, where he opened the Sebastien Gay route, and the three north faces of the Alps, Grandes Jorasses, Cervino and Eiger, paragliding and walking, always with his violin.

His film will be presented on Tuesday 15 December at 5:00pm in the sala BBK.