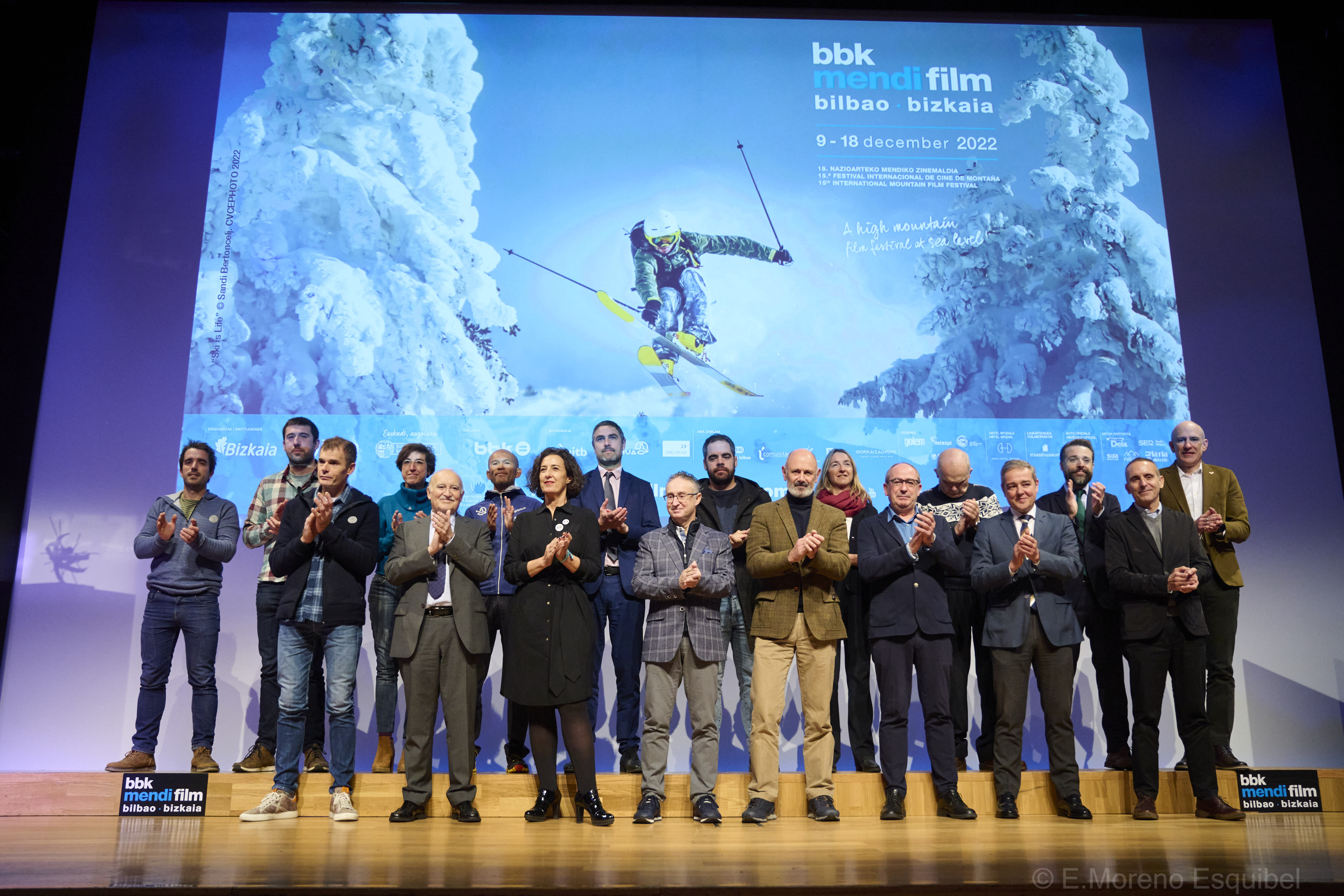 Bilbao, 22th of November 2022. The BBK Mendi Film Bilbao Bizkaia festival presents its 15th edition to once again enjoy the best mountain cinema between 9 and 18 December.

The BBK Mendi Film Bilbao-Bizkaia film festival will be held in three cinemas in Bilbao, connecting once again live with the public: Sala BBK, the Golem cinemas and the Euskalduna Palace.

31 film sessions have been scheduled for the 15th edition. In addition, 4 conferences/colloquiums will be offered and 3 exhibitions will be held.

Tickets for the sessions will be available through www.mendifilmfestival.com and the points of sale and platforms of Euskalduna, Golem and Sala BBK, on Tuesday, November 22. The advance purchase is cheaper compared to the acquisition of tickets on the days of the session.

In this new edition, 59 films will be screened.

The producers and filmmakers opt for the Mendi Film for the premiere of their films:

Bilbao will once again be the epicentre of Mountain, Adventure, Extreme Sports and Nature Cinema, from 9 to 18 December.

Renowned filmmakers sign many of the participating films this year. And some of them will be present in Bilbao.

The three main venues of the festival are the Sala BBK, the Euskalduna Palace and the Golem Alhóndiga cinemas of Azkuna Zentroa. And after two years conditioned by the limitations derived from the pandemic, the theatres once again offer full capacity, without restrictions.

The WOP-The Walk On Project Foundation and Mendi Film Festival Elkartea are awarding the WOP Mendi Film 2022 Foundation Award to Dr Eduardo Martínez de Pisón, geographer, writer and mountaineer from Valladolid. The award will be presented during the 15th edition of BBK Mendi Film Bilbao Bizkaia, in December 2022 (from the 9th to the 18th).

This award, which recognises the defence and dissemination of the values of mountaineering, is in its 9th edition. Eduardo Martínez de Pisón joins the list of outstanding personalities and entities that have been involved in it: WOP Mendi Film Award 2014-2021

The International Alliance for Mountain Film is proud to announce that its 2022 Grand Prize has been awarded to Australian director Michael Dillon for his contribution to mountain cinema. At the celebration of the IAMF Grand Prize his film "Everest – Sea to Summit", the most awarded film in the history of mountain cinema, will be screened. The ceremony will be held in the Sala BBK venue, within the session of 7:30 p.m. on Friday, December 16.

BBK Mendi Film Bilbao Bizkaia is a member of the alliance along with 27 other festivals and the National Mountain Museum of Turin, and its director Jabier Baraiazarra is the current president of the alliance.

Mendi Film, the Provincial Council of Bizkaia and the outdoor clothing brand Ternua created a grant two years ago to support initiatives by young filmmakers (18-35) with an endowment of € 10,000 and advisory service.

The filmmaker awarded with the grant in the second edition was the Asturian Marina García Andreu, who has created the short film "Lobos", which will be premiered on Wednesday, December 14 at the Golem Cinemas (20h). In this session, the winning project of the third edition of the grant will be announced, and his/her work will be premiered in the 2023 edition of the BBK Mendi Film Bilbao Bizkaia.

In the sessions with guests, there will be sign language interpretation so that deaf people can enjoy the films and their subsequent talks.

Mendi Film began its journey in 2008 in Vitoria-Gasteiz, and from 2012 it moved to Bilbao. It is one of the most anticipated cultural events at the end of the year in the capital of Biscay, as evidenced by the data of public attendance at the event:

The Mendi Film Festival and the Sua publishing house present the third issue of their comic book collection. After the first Basque summit of Everest and the Iñurrategi brothers’ history, the protagonist of the third comic is a legendary basque mountaineer: Andrés Espinosa (1903-1985). A man ahead of his time. A giant without hero wood.

Once again, with the guarantee of the script and the texts of Ramon Olasagasti, the illustrations of César Llaguno and the color of Felipe H. Navarro, the comic "Andrés Espinosa" is the tribute to a great character.