BBK Mendi Film Bilbao-Bizkaia will celebrate the 14th edition between December 3 and 12, joining both cinema fans and mountain lovers in Bilbao and at the same time at the on-line festival 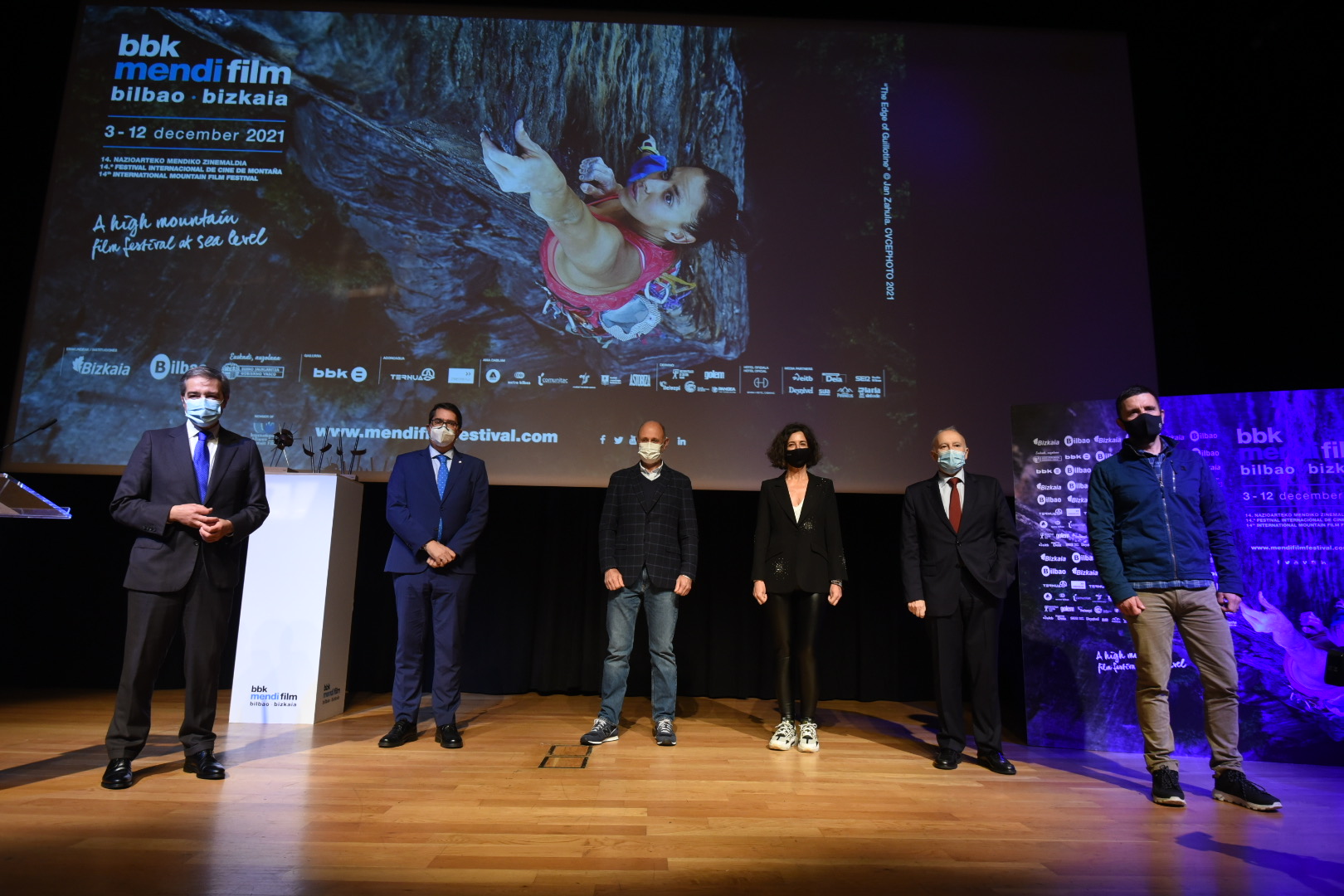 Bilbao, November 19, 2021. The 134th edition of BBK Mendi Film Bilbao-Bizkaia will be held from December 3rd to the 12th. It will be a special edition, conditioned by the pandemic. At the event held today at the Euskalduna Palace in Bilbao, the main sponsors and representatives of Mendi Film presented the festival.

BBK Mendi Film Bilbao-Bizkaia will be held with a face-to-face audience at three Bilbao venues: The Euskalduna Palace, the Golem Cinemas and the The Sala BBK theatre.

Tickets will be on sale through www.mendifilmfestival.com, and the Euskalduna, Golem Cinemas and Sala BBK online sales platforms, as of Monday, November 22.

The films of BBK Mendi Film Bilbao-Bizkaia can be seen online, giving continuity to the 2020 offer that was so well received by fans of the genre. Using the on-demand formula by the Vimeo social network, you can buy either the full pack of the films in the Official Selection, thematic packs, or individual films.

The rental will be available from November 22 (pre-purchase) until December 12. The viewing period will come into effect on December 4.

Additional content on films will be offered, such as: synopsis and trailers, posters, directors' presentations, and subtitles created by Mendi Film in Basque and Spanish.

52 films of mountain, adventure, extreme sports and nature will be screened.

There are 52 films, including feature films and short films, representing 11 countries, mostly European. Spain and France stand out with 15 and 10 films, of which 11 are Basque films. The United States having 7 films, and Canada 4, are the Non-European countries that remain faithful to the Bilbao event. United Kingdom (5), Italy (3), Austria (3), Slovakia (2), Germany (2) and the Polish-German-Swiss co-production 'Sciana Cieni (The Wall of Shadows)', complete a luxury selection for the imminent edition of Mendi Film.

The Mountain Culture has known how to overcome the pandemic. 192 films have been inscribed presenting their candidacy to be selected in the festival's 10-day program. It is a record number of films to be presented for the Mendi Film, surpassing the 175 of the year 2020. The new common unified entry form, of the 27 member festivals, of the IAMF-International Alliance for Mountain Film has been very productive, and has perfectly complemented the registration through the mendifilmfestival.com form.

Such a roster of directors, joined by many others with their most recent productions, make the level of the films in this new edition excellent.

A WORLD PREMIERE FOR THE OPENING CEREMONY: ‘MENDIAK 1976’

The official Opening Ceremony will be held on Saturday, December 4, in the Auditorium of the Euskalduna Palace with the international premiere of the film "Mendiak 1976" directed by Luis Arrieta. It promises to be a session full of emotions and energy, since the Navarrese and Polish expedition members who in 1976 lived an intense history of brotherhood around a memorable rescue in Shakhaur (Afghanistan, 7,116 m.), will meet again 45 years later in Bilbao.

A new Award is to be premiered: The Best Soundtrack. A composer/author of a soundtrack will be awarded the financial prize and the 'Txalaparta' trophy created by the sculptor, Iñigo Aristegui, who is also the author of the 'Eguzkilore' trophies for the other awards.

The Jury of the 14th edition of BBK Mendi Film Bilbao-Bizkaia:

Bilbao breathes mountains and nature from the hand of 6 exhibitions.

The journalist, filmmaker and mountaineer Sebastián Álvaro will be awarded the WOP-The Walk On Project Mendi Film 2021 Award. The award, given for the 8th time, recognizes the defence and practice of Mountaineering values.

The event will be held on Sunday, December 5, within the Euskalduna session that will begin at 8:00 p.m.

Last year the  Mendi Film, the Provincial Council of Bizkaia and the outdoor clothing and material company Ternua created the grant that promotes young filmmakers, (18-35) ,  who want to join the trend of Mountain Cinema.

The short film ‘Txango’ directed by local filmmaker Tamara Lucarini Cortés, the grant recipient of the first edition, will premiere on Thursday, December 9 at the Euskalduna, at 8:00 p.m. It is there where the project awarded for the 2nd edition will be announced (to premiere at Mendi 2022), and the 3rd edition will be presented (for 2023).

Mendi Film began its journey in 2008 in Vitoria-Gasteiz, and from 2012 it moved to Bilbao. It is one of the most anticipated cultural events at the end of the year in the capital of Biscay, as evidenced by the data of public attendance at the event:

The festival is one of the great world references for mountain cinema, and is a member of the International Alliance for Mountain Film (IAMF), chaired by Jabier Baraiazarra, director of Mendi Film.

The gratitude to those who have accompanied us during this journey is infinite, even more so with the endorsed support in times of pandemic. Together we form a solid team.