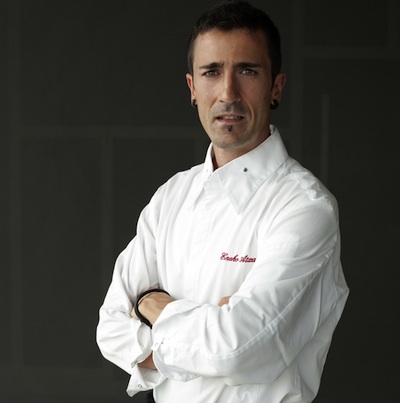 Protagonist of the 'Panel Talk' about 'The Challenge' with Alberto Iñurrategi

Eneko Atxa (Amorebieta, 1977) studied at the Hotel School in Leioa. He later worked in several restaurants in the Basque Country, as the Baserri Maitea, Asador Zaldua, the Andra Mari in Galdakao, the restaurant of Martin Berasategui or the restaurant Mugaritz of Andoni Luis Aduriz, among others. Always looking for new challenges, in 2005 he opened his own restaurant, Azurmendi, and only two years later, the Michelin Guide awarded him with the first star. In 2012 came the third star, becoming the first cook fron Bizkaia (Basque Country) distinguished with this award. Eneko Atxa, in its ongoing pursuit of excellence, also won another prize in 2013: his restaurant Bistro Pret a Porter, was awarded by the Michelin Guide with distinctive Bib Gourmand (quality food at moderate price, category created by the Guide 1955 ). Here again, he is the only one in Bizkaia.